CERTUSS: Steaming across the Atlantic

CERTUSS: Steaming across the Atlantic

CERTUSS Germany is historically positioned in the heart of Europe. Whether talking of geography, economy or demographics, CERTUSS have their finger on the pulse of Europe, in Krefeld North Rhine-Westphalia and Rhine-Ruhr, the largest metropolitan region in Germany. Today, the Rhine-Ruhr accounts for roughly 15% of the GDP of the German economy, which would place it as the 3rd largest gross regional product of metropolitan area in the European Union and the 16th largest GDP in the world*.

CERTUSS UK was founded in Birmingham in 1989. Birmingham not only belongs to the “Blue Banana” (or Manchester – Milan Axis), but its wider metropolitan economy is the second-largest in the United Kingdom and its GVA is in continuous growth, in the services sector, but most importantly in the engineering and healthcare sectors, where key steam applications take place.

2017 marks a milestone in the history of CERTUSS: a family owned company gone global celebrates its 60th anniversary! Tradition meets innovation and the CERTUSS deeply rooted principles and standards of quality and ethical supply management conduct go global. The 60th anniversary celebration is the proof that only by such principles and standards a medium-sized company can grow and establish a name worldwide synonymous of high quality and reliability.

CERTUSS America has proudly been a resident of the CBEI Commercialization Center at the Philadelphia Navy Yard right from its establishment. Pennsylvania constitutes a strategic location along the East Coast Corridor and provides a perfect transportation infrastructure. Those, together with the great support provided by the State of Pennsylvania as well as local economic developers have been the main themes in the meeting of 01/26/2017 of Mr. Mathias Brauner, Managing Director of CERTUSS GmbH & Co.KG and sole stockholder of CERTUSS America and Mr. Holger Deimann, President of CERTUSS America, with Lieutenant Governor of Pennsylvania Mike Stack and Rep. William F. Keller, Democratic Chairman, Transportation Committee.

In a world changing rapidly from both sides of the Atlantic, economically, politically and socially, voices of concern rise in both continents with regards to the economic and political stability and the future prospects within the European Community as well as between Europe and the States and their bilateral relations. In the discussions held, CERTUSS had the opportunity to express their gratitude to the State of Pennsylvania for the ongoing support and to ensure they will sustain all efforts contributing to the economical development and business growth, raising thus a stable voice of optimism with regards to stability, creation of employment and strengthening of the relations between the two countries.

Just a couple of days before the Company’s first public event of the year, the participation at the AHR in Las Vegas Jan. 30. – Feb. 01., the official visit at the Pennsylvania Main Capitol has been the first event in a series to underline 60 years of quality, reliability, dedication and solemnity. 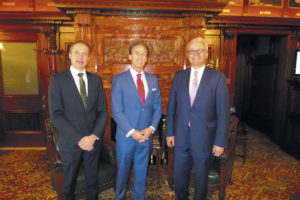 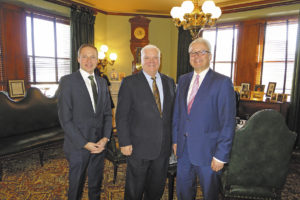 Rep. William F. Keller, Democratic Chairman, Transportation Committee with Mr. Brauner and Mr. Deimann during the visit of 01/26/2017 at the Pennsylvania Main Capitol

We don’t just manage suppliers, we micro-manage them. We have a consultative, personalized approach